Radical Candour: The Problem with Being Too Nice 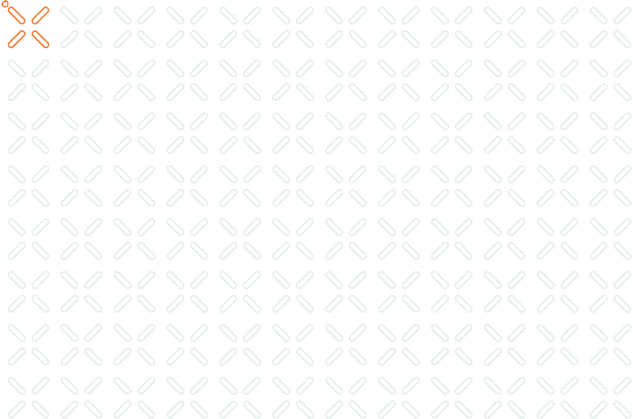 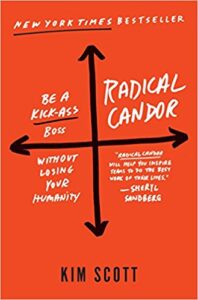 Radical Candour: The problem with being overly nice

Is it more important to be liked or respected? How you answer this question will likely indicate just how you approach giving feedback.

As a manager, have you ever found yourself irritated by something someone has done, but you end up softening the feedback to the point it actually sounds like you are praising that person?

In our 360 degree feedback group coaching workshops we see managers struggling to have the tough conversations with their peers, direct reports and their bosses. Commonly we are awkward, beating around the bush. Who wakes up in the morning saying to themselves ‘today I want to be disliked?’

Being too nice directly leads to what Kim Scott has coined as ‘Ruinous Empathy’, where one is overly nice in order to spare another’s feelings. If we give feedback in such a way not only will we be feeling the repercussions sooner or later, we will be doing a real injustice to the feedback receiver, the team, the entire organisation and simply put, waste everyone’s time.

Don’t get me wrong. Being nice is important. Google ‘kindness‘ or ‘Be Kind’ and you’ll see the current zeitgeist. However when critiquing, feedback needs to be balanced with the ability to challenge directly. The right balance is what Kim has referred to as ‘Radical Candour’. It basically means saying it straight whilst still showing empathy about the person you are saying it to. The below framework is used to describe the behaviour depending on where you sit along the axes. 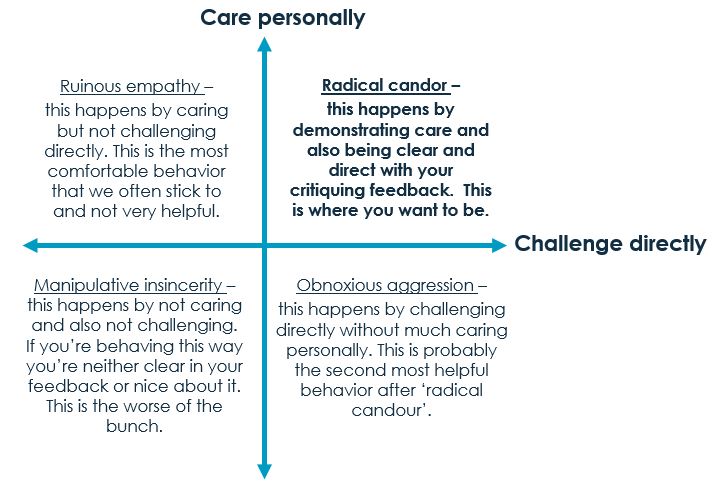 So the good news is you don’t have to be a nasty manager to be direct. You can say it as it is while also remaining human. To help you put this into practice keep some of these handy pointers in mind:

1. Ask people to be radically candid with you (and be thankful when they are!)

Although this may take a while for your direct reports to warm up to, once they do, be quick to demonstrate its ok for them to give you feedback and don’t critique their criticism! This also gives you the experience of what it is like to receive feedback and most importantly, builds a foundation of trust.

Explain why you are seeking feedback (ideally explain the framework) and say something along the lines of ‘We all have feedback to offer those we work with and this includes myself. I’d really appreciate it if going forward you can be honest and direct with me if there is any feedback you can give about my approach as a manager or the work I produce.’

It may take a while for your direct reports to warm up to this so begin with baby steps and ask questions in team meetings or 121s such as ‘do you feel I keep you updated enough on X…’ or ‘do you feel I am approachable if you have an issue…’ or ‘what could I have done differently to have helped situation x.’

Our engagement surveys indicate that very often employees are looking for guidance and coaching from their managers, so when providing critical feedback be sure to offer support. I recall a manager who noticed that a direct report of his was not taking the initiative as much as he used to, the manager explained how he naturally also lacks the drive to be proactive (demonstrating empathy) and explained what approach he takes to be more proactive.

Don’t overthink it, just say it. If you’re over thinking how to give the feedback you probably won’t get the message across.

4. Do it in person and keep it informal

It doesn’t have to be a long discussion and it certainly doesn’t need to wait for the next 121 or performance review meeting. Start off by doing it in person (and in private) and avoid emailing.

5. Praise in public, criticise in private

Kim illustrates the point in a question: ‘If your colleague walked out of the restroom with their fly down what do you say?’

Ruinous empathy behaviour means you do not say anything (and let them face further embarrassment), being obnoxiously aggressive (high in direct challenge and low in personal care) means you shout it out in front of others, being radically candid simply means you whisper it to the person. 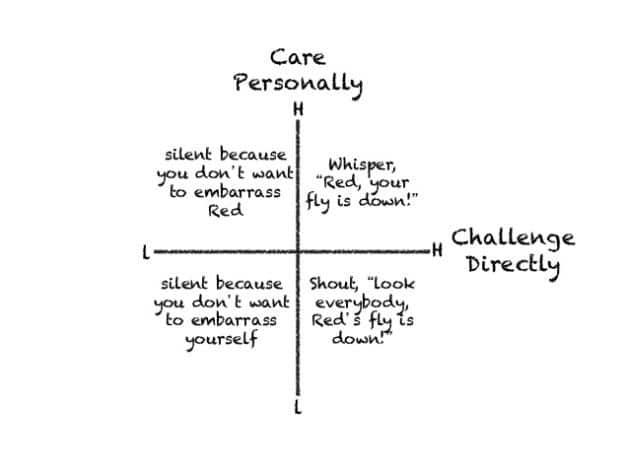 6. Be specific and avoid personalisation

Don’t be abstract. Explain when it was, what it was (behaviour or the work) and the consequence. You want to separate the action from the person, so by critiquing the behaviour or the piece of work you ensure that it’s not a personal attack (e.g. ‘the decision taken yesterday was not the right call for the client’ vs. ‘you did the wrong thing for the client’)

7. Demonstrate your confidence in the person

Being specific means you’re not leaving any room for interpretation. As Steve Jobs said ‘do it in a way that does not call into question your confidence in their abilities.’

A recent example I heard of included a manager telling her direct report ‘I don’t feel the conclusion slides of that presentation were as strong as they could have been. Having seen you in action before I know you can finish on a stronger note.’

To conclude. Yes it may be uncomfortable. And yes there may be a reaction. Your job is not to control their reaction. Your job is to be there to respond to their reaction and show you care. Even with the uncomfortableness, if you demonstrate care with your direct feedback you’re helping the person more than you know it. After all, you owe it to your people to be a great leader.

Thanks to Costa Antoniou for this piece. 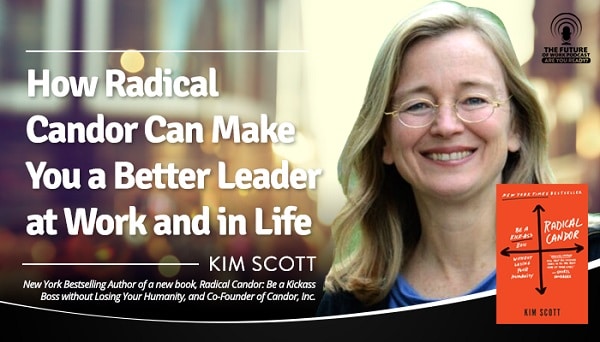 Want more like this? Get the next insight straight to your inbox.